Last week we had our first team from the United States! Five men from Illiniois and Indiana, including two pastors, arrived on Monday the 6th.  Another mission based in Manaus, with an experimental plane that seats 8 people, was able to bring the team directly to Humaita from Manaus. This was a huge time saver as their time here in Brazil was short. That afternoon the team, Jaelah, my dad, and Frank traveled an hour and 15 min. by speedboat to the community of Calama to hold a church service. Jaelah was given the job of translating from English to Portuguese for one of the American pastors. Three people gave their lives to the Lord during this service! The team spent the night in Calama, as the Madeira river, the river we now live next to, can be difficult to travel at night as there are many pieces of trees and things floating that are hard to avoid in the dark.  They arrived back in Humaita on Tuesday morning and we went to a churascaria for lunch- the ultimate Brazilian experience! That afternoon the team, my mom, and Frank and his wife went to a another community, called Namor, to help with a small group.  The interest factor of 5 Americans drew more people, so it actually was a rather large group–over 30 people.  They were able to hand out school kits put together by my cousins’ school in the US, Prairie Christian School in El Paso, IL. 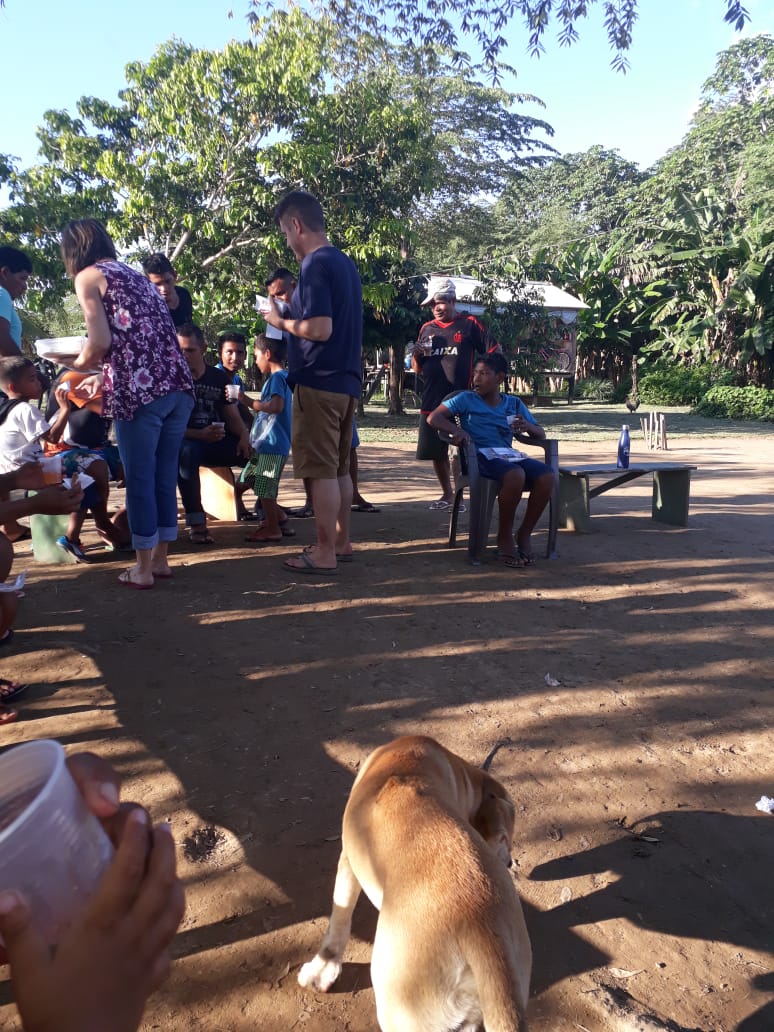 Then Tuesday night we went out on the town- burgers and ice cream for a taste of home!

Then it was my turn to take over translating duties! Wednesday morning the small plane that brought the team to Humaita came from Manaus to pick up the team and I and take us to another small city (Manicore~30,000 people), where the mission has two couples living and reaching out into the surrounding river communities.  My dad flew his small RV-6 to Manicore so he and I would have a way to get back to Humaita after the team left from Manicore to Manaus.

It took about an hour to fly to Manicore. This trip on a line boat (the ‘bus system’ of the river, would have taken almost 24 hours).  About 3:00 that afternoon we left in two speedboats to have a service in Jatuarana. We arrived early, and since the service wasn’t until 7:30 we went to another community, Terra Preta, to meet the host of the weekly cell group. We went back to Jatuarana and ate acai at Dona Branca’s house and talked until 7:30. (Dad visited Dona Branca and her husband almost two years ago and they were so excited when he went back to visit them after we had moved to this area. They joke that he has his own room to stay in at their house whenever he wants to visit.) 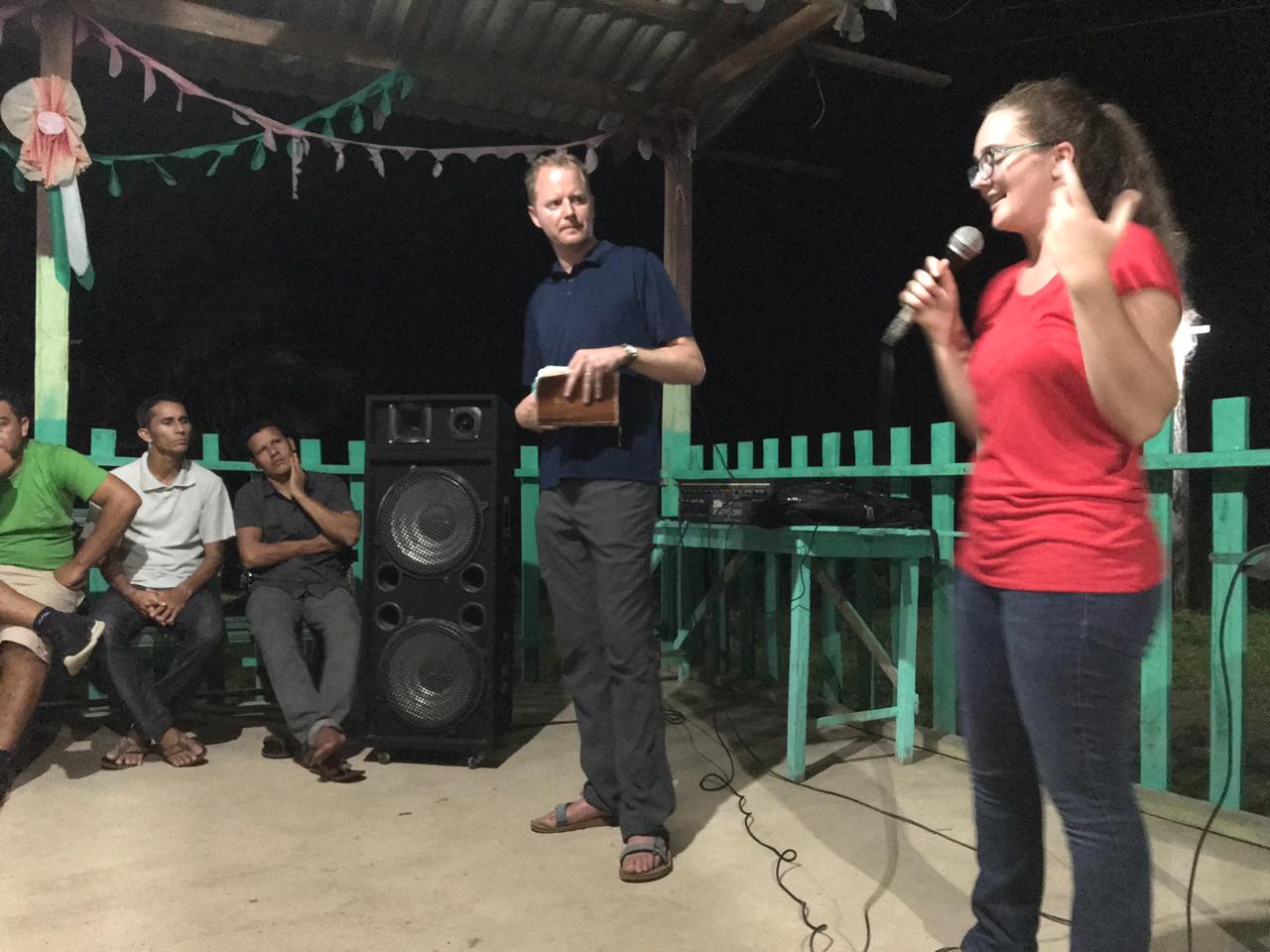 Andy Kaufmann, our good family friend, and Amazon Salt & Light board president, preached and I translated. I was prepared to translate for that but then one of the other team members was asked to give his testimony and I was caught off guard. But I think it went okay. 🙂 After the service we carefully made our way back to Manicore since it was dark by that time. We had supper at the apartments where the two ASL Brazilian couples live and the went back to the hotel to sleep.

Thursday morning we headed out to Mucambo, the final community we planned to visit, about 7:30 am. 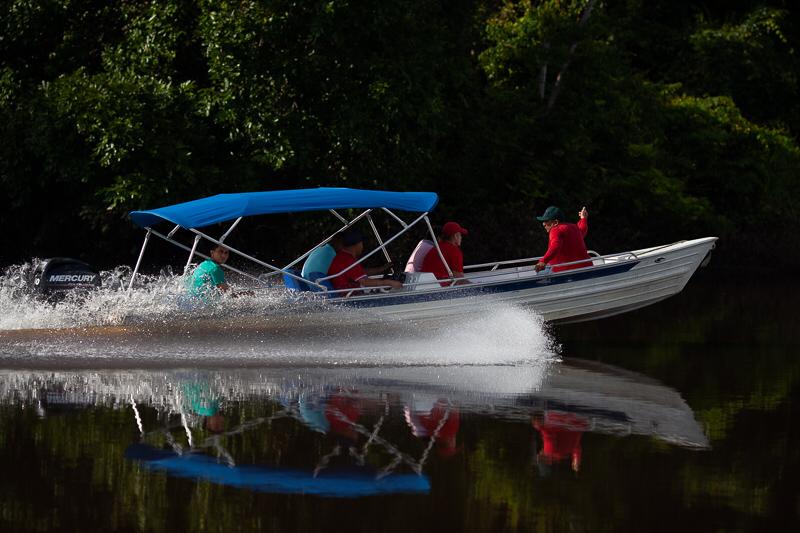 When we got to Mucambo most of the people were busy making farinha. Farinha is a yellow crumbly type of flour made from the manioc plant and is a cash crop in northern Brazil, vital to the Brazilian household. In all seriousness if you don’t have farinha for a meal, whether it be rice and beans or lasagna, some Brazilians can hardly eat without it. Back to Mucambo… since most of the community was busy we didn’t plan on doing a big meeting but some people showed up so I translated for Jeremy Zobrist who gave his testimony and Andy Huette who talked about the Prodigal Son. My dad also gave the school teacher a water filter. She had been boiling water for the kids to drink at school and was happy to not need to do that anymore. After our short meeting and the water filter donation we went back to Manicore for lunch and then the team took off for Manaus about 3:30 on Thursday. Remember they just got to Humaita on Monday morning, so we pack a lot into a few days! Here is a video of the team leaving for Manaus (click here)

Dad and I were also going to leave that afternoon to come home to Humaita but he decided to stay and have a meeting with all the Brazilian ASL missionaries as they had all come to Manicore because of the team. Since we stayed they also had a service that night.

The plan was to leave at 7 am on Friday morning but it was foggy when we got up so I got to sleep in a little longer. 😉 But then the sun came out and he and I took off for Humaita! We got here safe and sound and are waiting for the next team to come down!!