Last Tuesday our Western Adventure began.  We headed to Iowa and spent the night with the Yersin family—they were terrific hosts.  It was ‘like Christmas morning’ for Luke, as their son Grant described it, when he saw the train set in the basement, and all the Nerf guns—and got to try them all out! Unfortunately, I didn’t take any pictures while we were there.

Wednesday we were off to Minnesota to visit the Hastad family, also terrific hosts. Luke really loved these first couple days of our trip—Yersins have 2 sons & Hastads have 3, so he was surrounded by boys—that doesn’t happen very often at our house!  Wednesday evening we were blessed to meet some of the wonderful people at Faith Lutheran Church in London, MN and share a little with them about how God got us started on this journey and what our future looks like at this point.  The kids had a great time playing together and I completely forgot about picture-taking until Keegan & Carson were racing to the bus the next morning for their first day of school J We did manage to get one of us with Chad & Kim. 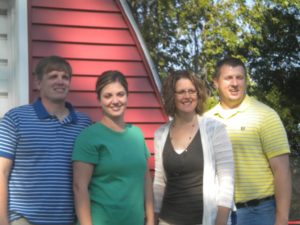 And then to South Dakota for a few beautiful, (mostly) relaxing days in the Black Hills.  We stopped at a prairie homestead & poor Luke got the daylights scared out of him by the ‘guy’ sitting in the outhouse.  Drove through the Badlands and were awed by God’s creation. 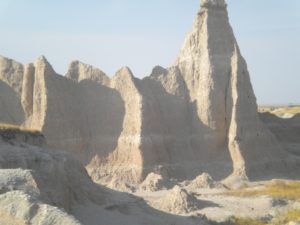 On to Wall Drug for some ice cream.  Mariah and Jaelah counted all the Wall Drug billboards between the South Dakota line and the store—but came up a little short since we got off the interstate and drove through the Badlands, thus missing about 20 miles worth of signs—they were a little concerned at first because Grandpa Lehmann had promised them each a candy bar if they came up with the right number but then decided the detour was worth it. I’m thinking Grandpa will probably pay up anyway 🙂 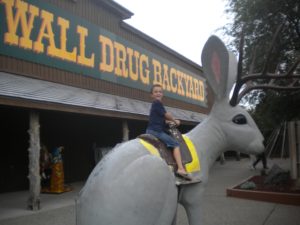 We spent a few nights in a cabin near Custer State Park and the kids got to know another great family on the playground.  Had breakfast in Keystone Friday morning and Mariah and I walked on the ‘historic boardwalk’ on Main Street. Then we were off to Mount Rushmore—just incredible, they thought it was pretty neat to ‘see the Presidents’. (And we did get to see them much closer than this.) 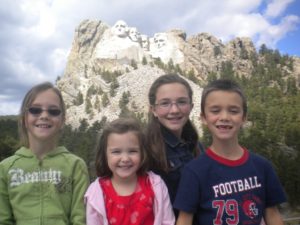 We took a scenic drive and stopped to climb  some rocks, one of the highlights of the trip for the kids.  They kept asking to go back and climb in the same place.  We hiked to the top of the ‘hill’ behind the campground later that afternoon and all touched the American flag at the top—although Sierra was not very enthused about hiking.  Daddy carried her most of the way back down.

Saturday morning was playground time for the kids, laundry time for Mom J  Played a round of mini-golf and then went to Sylvan Lake at the recommendation of some friends in Michigan who were here last year.  Excellent recommendation—it was absolutely gorgeous!! We even got up close & personal with a bison on the way—it was right across the (not very wide) road.  I was excited, til Matt rolled down the window and started calling to it. 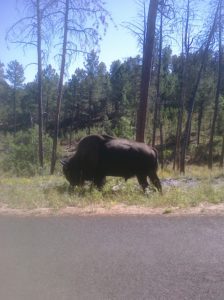 We took lots of pictures, and although pictures never quite do it justice, Jaelah decided we could turn some of them into postcards. 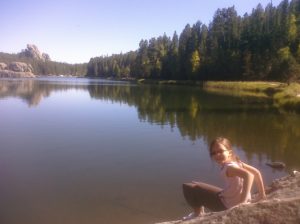 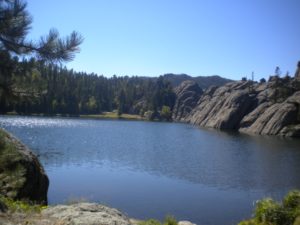 They were set up for a wedding and we even got to see the bride just before we left! (Note: This was only exciting to the girls and I.)  Mariah twisted her ankle pretty good because she was r-u-n-n-i-n-g and shouldn’t have been, thankfully that’s all it was.  Ice and elevation seem to be helping.  We took a trail off the main trail around the lake, Sierra cried because she was convinced the big rocks were going to fall on her (and she might have been a little tired too). 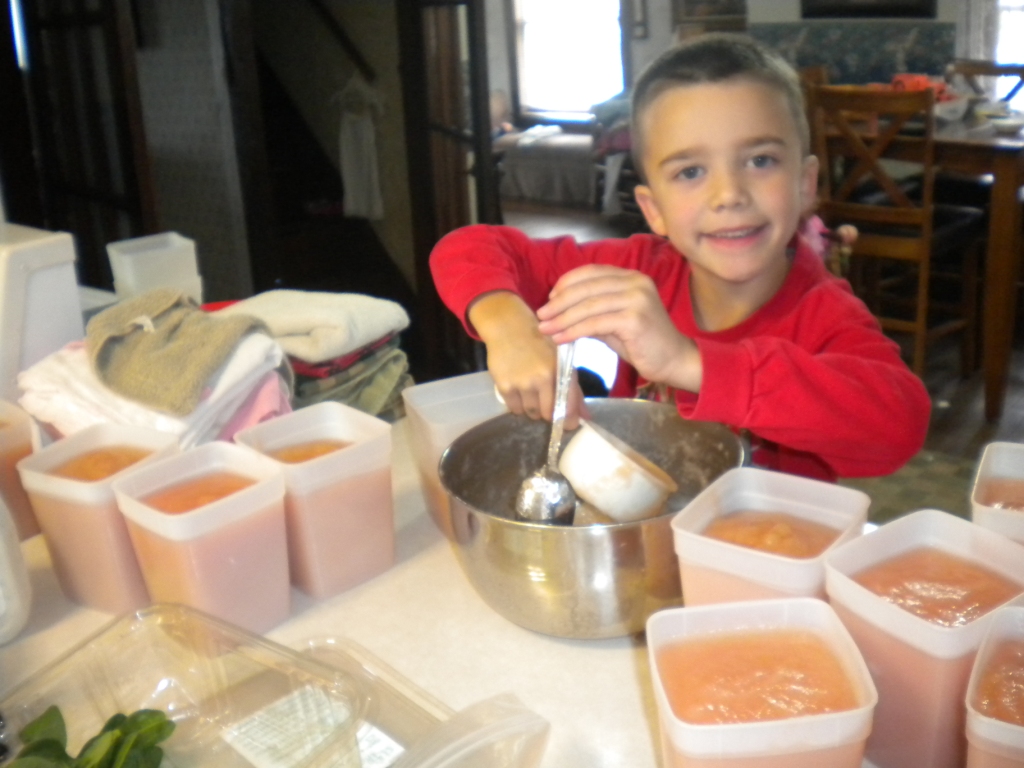 This path was large rocks along a little stream, with handrails installed to make it safer-no one got hurt but Matt decided he needed to climb the rocks next to the trail—I told him just when I’m comfortable with something and not worrying he has to kick it up a notch.   In the picture below, I am standing on the trail—see how far he climbed?  With two kids following?? J   Never a dull moment here! 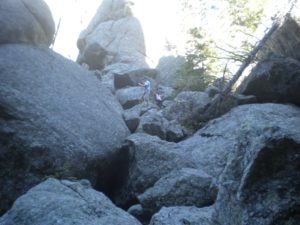 Yesterday was time to leave our cabin and head south for Colorado.  We took the ‘Wildlife Loop’ and saw a few more bison and some very friendly donkeys/burros right on the road—looking for a meal.  Again, someone had the window down and someone else (actually the oldest & youngest of us) had a small panic attack about the possibility of one of those things sticking their head clear in the open window.  Mariah’s fave on that part of the trip was the pigtail bridge—we don’t have any of those back home!

Drove through eastern Wyoming on the way south—there is not much there but sagebrush & prairie grass but I loved it, almost as much as the plains driving across South Dakota—I love the wide open where you can see the big blue sky meet the land miles away-makes my heart sing.

We spent the night in Fort Collins last night  and after a stop at Great Clips this morning we were on our way again.  I even got Sierra’s hair cut—was going to go to her shoulders but the stylist talked me out of it & I was glad she did—maybe she could tell that I was about to cry? 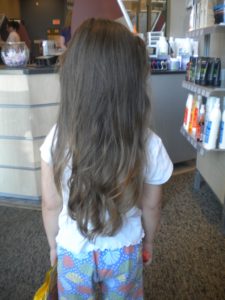 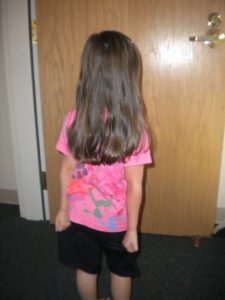 I started this post as we were driving through Denver and could see the mountains off to my right—it was like watching a moving postcard, just picture perfect.

Almost to our ‘home’ for the next three weeks—Mission Training International (www.mti.org).  I’m ready to unpack for a little while—and get some of the clutter out of this van!  It is a pit after in and out so many times over the past week.