Hi everybody!! I’m back with another boat trip….lol.

we left last thurs. morning, got up at 4:30AM to leave at 5AM, but didn’t leave till 7AM i believe. we got there about 9:30 or so and kinda started our things up right away so we would take advantage of the time. (since we were going to leave sat. and it wasn’t like a week-long trip) we had a lady that taught the women how to sew, (a way to support themselves), another that taught them how to crochet, health care (nurses and a dentist), kids ministry stuff, and evangelizing.

so this community is very catholic, there were no evangelized people here, very strict ways.  for example, we showed a movie on thursday night and mostly kids showed up. okay so thursday. we set up and started doing some stuff and invited some kids (or tried to) to a service for them in the afternoon. it went really well, they were all kinda embarrassed, but they mostly always all. but there was 2 or 3 girls that were really listening and shouting stuff out. 🙂 later after the thing with the kids, we went and played with them on the beach and then some of us showered in the river. (cause there was no water on the boat!!) that night we showed a movie (War Room) and i think 2 or 3 people got saved. I’m not sure, i left before it was over cause i was exhausted. (oops- #guilty)

friday- our kids ministry team was going to go evangelize in the morning, but one guy disappeared after awhile cause we were taking a long time. (he started evangelizing by himself!) so then i actually didn’t end up going, i stayed with the ladies that were doing crochet, and then went down to the boat after awhile. (about the crochet- various people tried to get me to learn but i have no desire or want. or patience. so i’m sorry but…not learning here) friday afternoon we did another kids thing and then swam in the river again. (well, some of us did. we had water on the boat now so some people that had HAD to swam in the river the day before cause there was no water, could now so duh, shower on the boat. (it’s still the same water people)) that night we had a service and dad preached. 🙂 it was cool! friday afternoon joaquim actually came to pick up 3 guys here from Jutai that we know to go and sing and play for the service friday night. they just had to work so could only come friday night. it was fun, lots of fun music to dance too 🙂

okay so um, friday night….yeah not sure it’s a night anyone on the boat EVER wants to repeat. it is now moved to the #1 on my ‘worst night of  my life’ scale. about 11:30PM this wind started up and oh my, it could have ripped us from our hammocks. it was reallllly bad. so we were holding onto each other’s hammocks to not swing everywhere and then mom came up and told me and mariah to go downstairs (there is a room underneath the commander’s office that mom and sierra slept in—awesome for shelter from storms. also, the last time we went on this boat we had a storm and us kids stayed in here as well–very nice refuge room lol) because it was going to start raining and we were going to get soaked. so i went downstairs and guys were doing stuff and i just stood there bc she had told mariah to come too but she wasnt coming and mom didn’t come either. seriously people?! the cook was awake and sitting in her hammock so i sat beside her in a chair and then mariah came down. so then we decided to go in the room. we had to get sierra resituated (so we could lay down too) and then we lay down and figured out that ALL the guys were in ‘operation-save-the-boat-mode’. and they literally were. so we swayed and swayed from one side to the other and got little notices every once in awhile, and luke came to join us, and tried to not fall off the bunk. finally after about an hour, (it was still BAD) joaquim decided to get all the ladies and kids off. (there was like 2 younger kids and 4 teenagers) so we went up in the commanders office after everyone else was off and waited for us to get off. we all got wet to almost the waist, (we had to walk thru the water to shore) well, the guys were soaked all the way but the ladies and kids to the waist. so then we were standing on the beach and then joaquim told us to go up to where we had been attending people and doing the sewing stuff etc. so we went up there and there was some wooden tables and one big low one that some of us layed on. it was wood and hard, we didn’t have any blankets (after awhile some guys brought some and hammocks and sheets cause they’re wasn’t room for everybody) and our pants were all soaked. but we were tired! we finally got to sleep (I couldn’t sleep for very long on one side, imagine someone older!) and woke up about 8 saturday morning.

some ladies, like the cook, had already gone back to the boat. (you can see a picture of the kitchen after the storm below. that’s how bad we were swaying!) we made our way down and the guys were just sitting there, not looking like they were gonna come help us, and then they tried to move the boat. so then we waited and finally got back on. (#warmclothesfeltsogood) we waited for all the rest of the people to come back and then had breakfast. that morning we were going to do a last big thing with the kids since we were leaving that afternoon. joaquim had wanted to do a cell group with the converted people just to show them how it worked and so they could start their own right away, but we didn’t end up doing that. we actually left at like 5PM so we could get back before dark. (he didn’t want to run in to another storm) we were running fine, about 30min from santarem, in FULL view of it, the motor on the boat stopped. WHAT?!! seriously?!? it was overheated. now what? they got in the motor boat, pushed it with that for awhile but then said we wouldn’t have enough fuel to get all the way back so then they took the speed boat to go get the other boat to pull us back instead of just the motor boat. it was pretty cool, we were just floating with nothing holding us for like an 1 hour. and right after the motor quit….oh my, just peaceful….for like 1 min. before people started hollering about what to do. we finally got home to our house about 10:30PM because after we got back we had to unload the boat and everything etc.

and i got sick on sunday, (the day after we got back) and had a fever till thursday. then luke got it friday and he’s still sick, and i have have some respiratory and a really stuffy nose. prayers appreciated!! and i think there is a new rule: no one sick can ever travel again.

Love you all and thanks for reading! (comment your thoughts below :)) 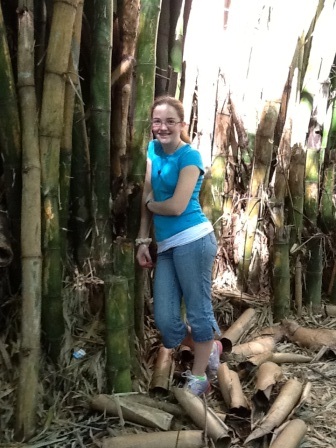 Dad and Mariah heading out to evangelize.

that night we had a terrible storm.