October has been a full month! It started off with Matt walking in the door on a Tuesday and asking if I’d like to go along on the boat trip with the team that was arriving from the U.S. that Friday, since I hadn’t yet been out with a team this year.  I said I’d think about it (and immediately started thinking about all the things I would need to do to get ready to go, and to leave my family for several days, and all the things Matt would have to do the next week because of course it wasn’t just a regular week 🙂  ).  So after reminding him that he knows a lot more about construction than I do and would be a lot more helpful on the trip, and making sure he knew that besides homeschool he was going to have to take the kids to the orthodontist, extra dance practices for an upcoming performance at church, and have them all out the door by 7:15 every morning because Mariah’s school schedule was switched to mornings instead of afternoons just for that week, I said sure.  Or something like that 🙂

This trip was a little different than the ‘usual’ in that we didn’t take a PAZ boat and stay on the boat during week.  We took a line boat (think Greyhound buses, on the river) to the city of Parintins, which is halfway between Santarém and Manaus.  It was an 18-hour trip and a new travel experience for me.  The week was great, due in no small part to the terrific team from Canyon View Vineyard in Grand Junction, CO.  A very fun group, very on fire for the Lord, always on the lookout for someone who might be in need of prayer.

We left Santarém Sat. afternoon and arrived in Parintins Sunday morning.  While on the line boat we met two couples that had traveled by motorcyle from southern Brazil up to Santarém, headed to Manaus and from there, through Peru, Chile, Bolivia, and Paraguay. I told Viktoria, the other PAZ missionary traveling with the team, that it was a good thing I was along instead of Matt or he might have abandoned them for a motorcycle adventure through South America! 🙂

After arriving in Parintins, we spent the day at the home of one of the families from the Igreja da Paz church there.  That evening during church (Brazilian church services are typically in the evening), two team members shared testimonies and another gave a message on God’s love.  Monday morning we headed to catch the balsa (ferry, for both vehicles and people) to Vila Amazonia where we would be helping with the church during the week, about a 45 min trip.  We were packed in much tighter than on the line boat, so I was thankful it was a short trip! (CAPTIONS ARE BELOW THE PICTURES) 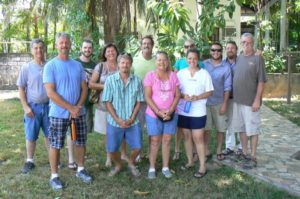 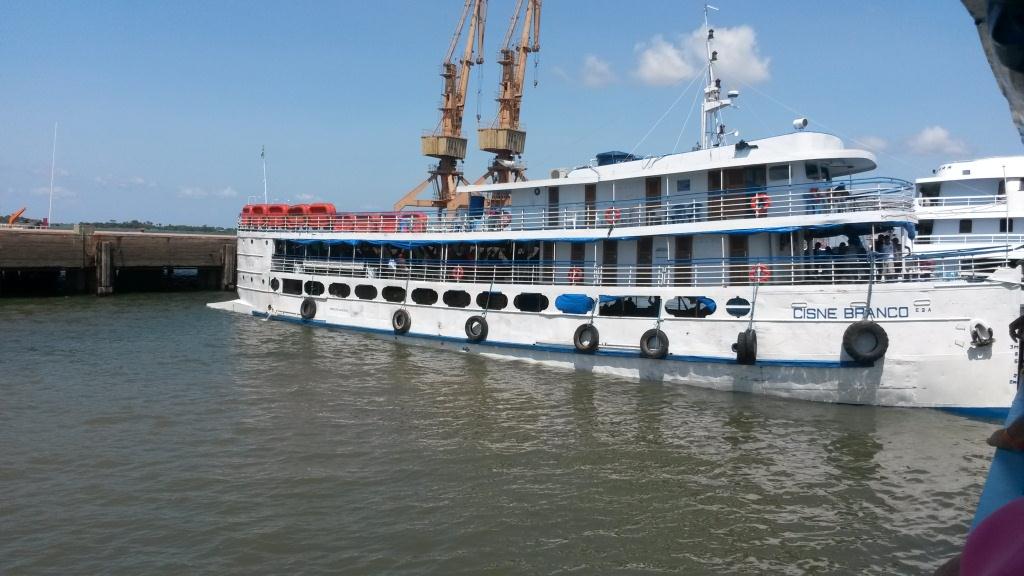 I didn’t manage to get a picture of the actual line boat we traveled on but this is a very similar one that pulled in RIGHT beside us to unload just before we left.

See what I mean?  RIGHT beside us!  The people getting off the other boat climbed onto and through ours to get to the dock. 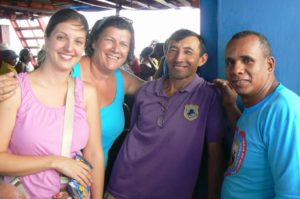 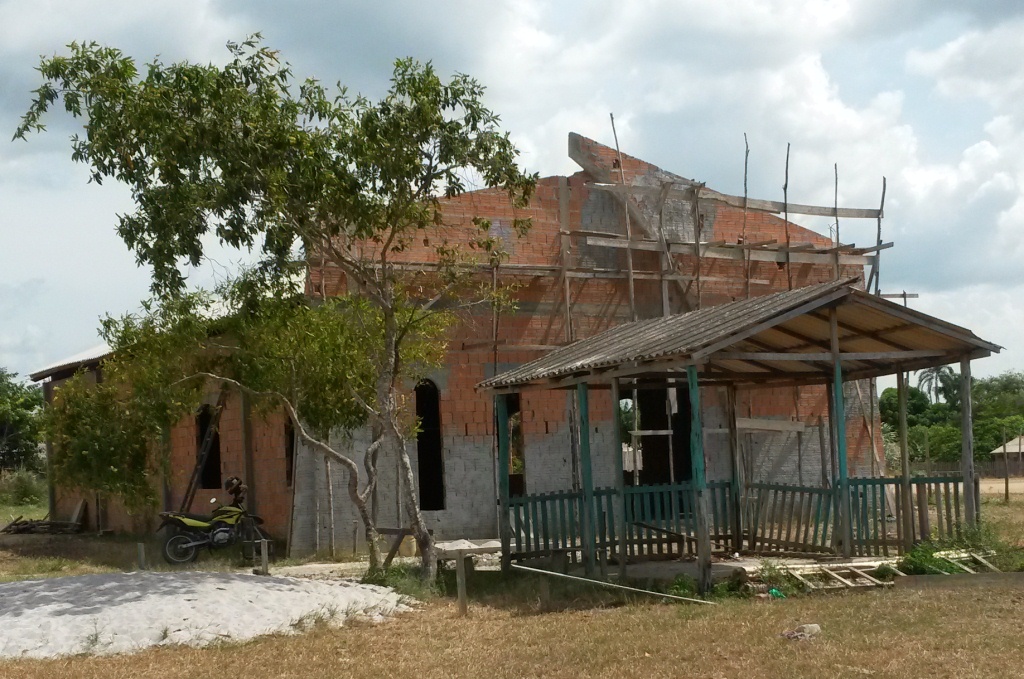 The church at Vila Amazonia when we arrived.  Although the outside didn’t change significantly during our time there, the inside sure did! Wiring was run and lights hung to complete the electrical, and the floor was leveled, fill added, packed, leveled some more, more fill dirt…. 🙂  And by Thursday evening the concrete was poured! 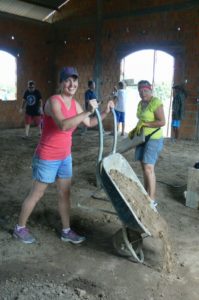 The first of MANY loads of fill dirt for the floor… 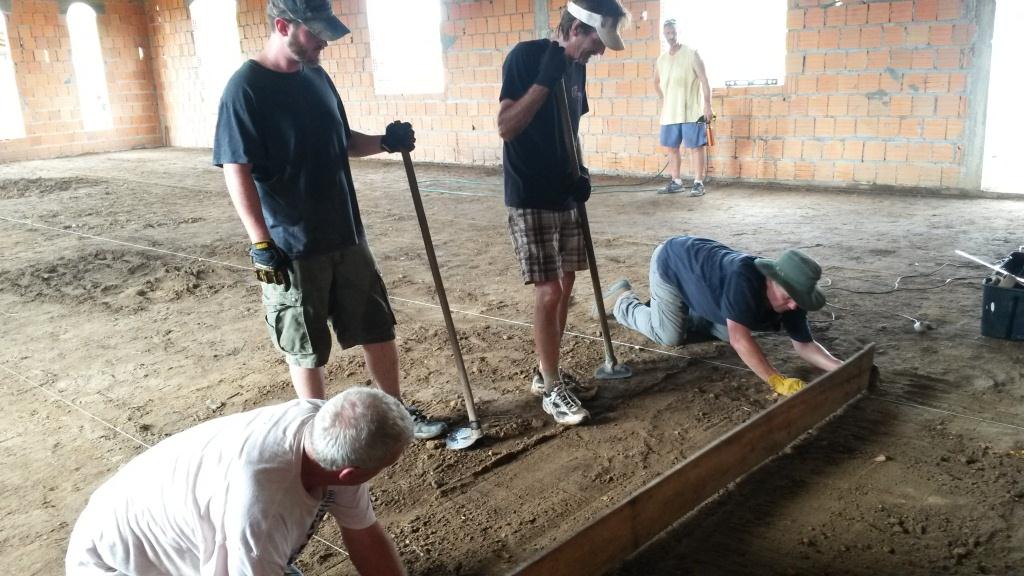 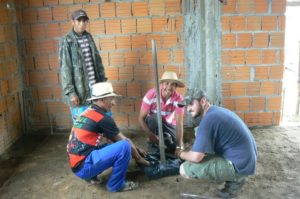 The two men on the left are from the Vila Amazonia church, in the middle the pastor, Pastor Salim, and on the right, Micah, one of the americanos.   They are working on a pounder to pack the dirt floor before the concrete is poured.  It has been referred to as a ‘widow-maker’.  I can attest to the fact that it will wear you out. 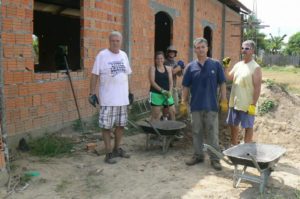 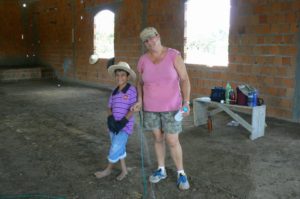 Viktoria and Lucas.  This sweet little boy is the pastor’s son and was there at the church each day ready to help, scooping sand or dirt, pushing wheelbarrows, picking up “non-dirt” things when we raked the floor.  He is the same age as our Luke and made me so lonesome for him! 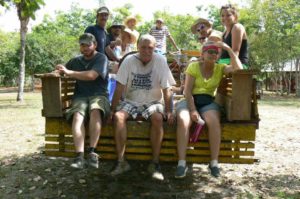 After lunch, the team loaded up on the truck and ready to head back to work. 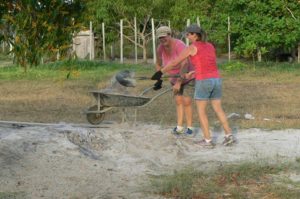 Just to prove I actually did something 😉  It was funny, and totally unplanned, but Viktoria and I ended up wearing the same color shirt 3 or 4 days on the trip (some days pink, some days blue–not the same shirt for 3 or 4 days!!)  We joked it was the PAZ missionary uniform 🙂 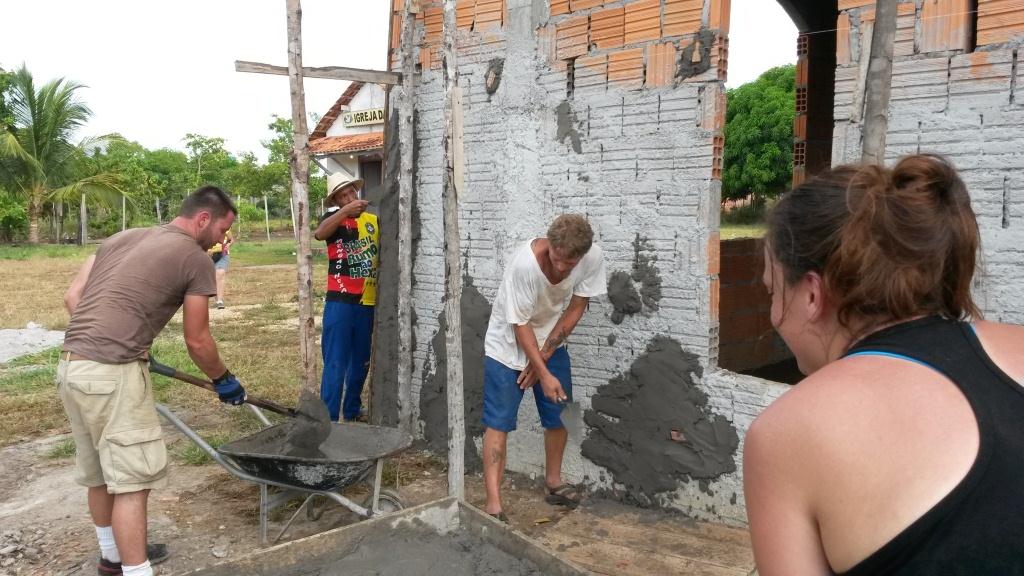 Plastering the outside walls–this was  way harder than it looked.  In the pic below, Pastor Salim is demonstrating the hand/wrist motion, kind of throwing it upwards at an angle toward the wall.  I tried several times, determined to get the hang of it after I realized I needed to throw it from farther away rather than smooth it on to the wall the way I started out, and then gave up as I started to feel guilty wasting material since it was pretty much ALL going on the ground!  Thankfully Viktoria was not around to get a picture of me then 🙂 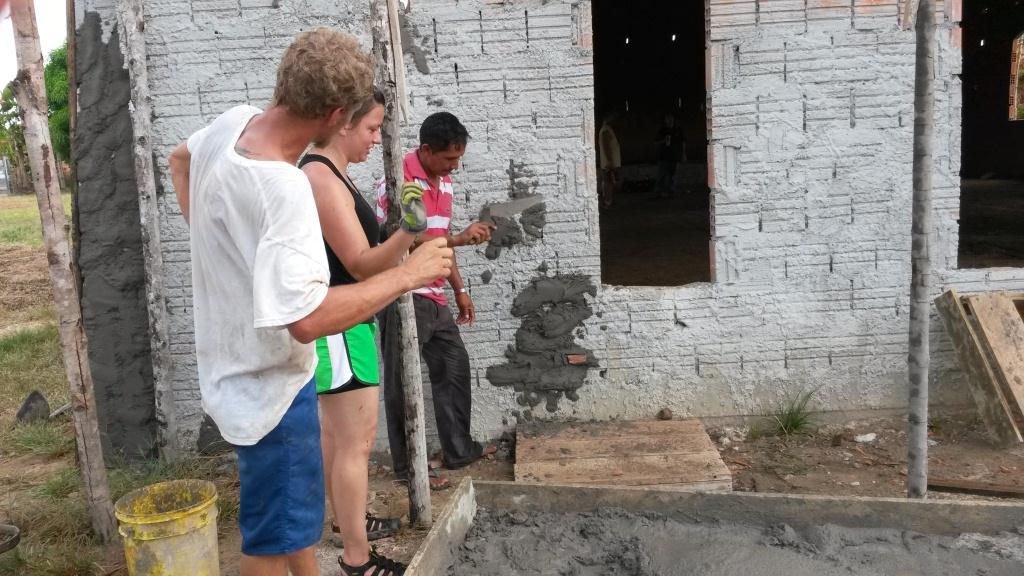 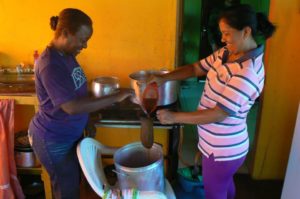 THIS is how you make coffee for a bunch of people that drink A LOT of coffee!!  The brown sock type thing in the middle of the picture holds the coffee grounds, pour hot water through and you have a very big pot of coffee (notice the container on the chair)!  I had only ever made coffee with my coffeemaker before coming to Brazil so this method (with the grounds in the mesh sock) was new to me, but many Brazilians make their coffee this way–although usually into a carafe and not into a 3 gallon jug! 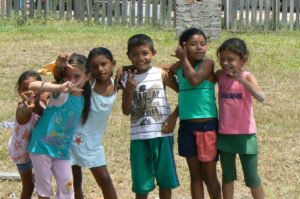 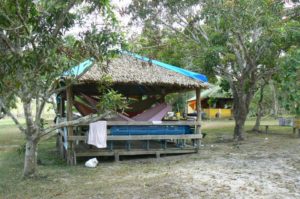 Where we stayed during our time in Vila Amazonia, the covered structure in the front doubled as dining room when the hammocks were rolled up.  The yellow building to the right, held a small kitchen, sleeping area, and the sole bathroom for 18 people. I slept in that building because it also had screens that could be dropped to cover the open sides and keep out the mosquitoes.  I was blessed to sleep between two very special people who also happen to snore–blessed to have some extra prayer time while awake during the night, blessed to realize I am blessed with a husband who doesn’t snore, and blessed with the knowledge to take earplugs AND Tylenol PM on the next trip 🙂 🙂 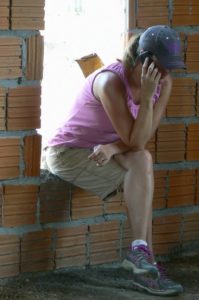 Saying hi to my hubby and kiddos during a break.  I was SO thankful that we had good phone reception and even occasional internet at the church so we could talk and message a little–made those 7 days of being away a little bit easier! 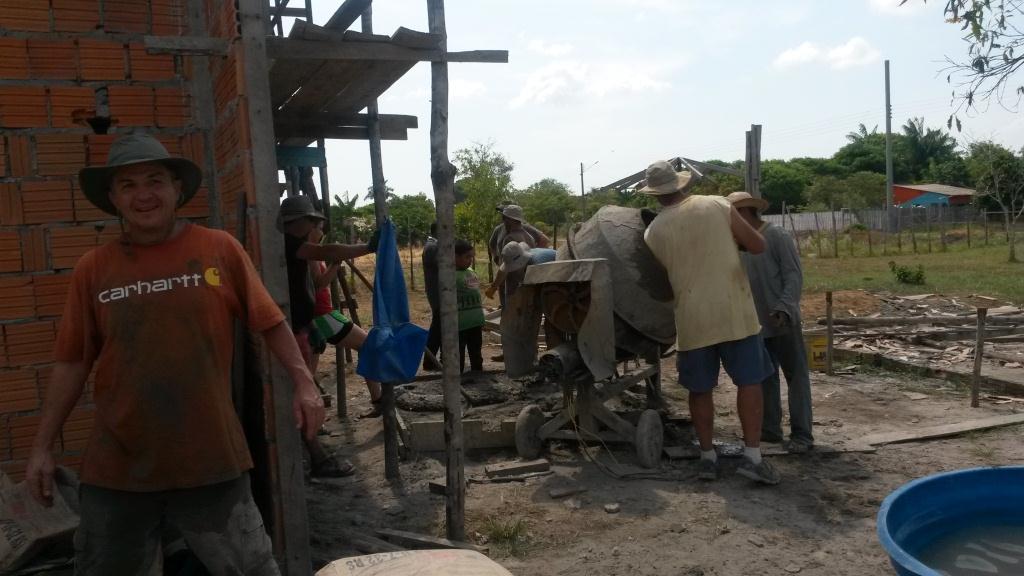 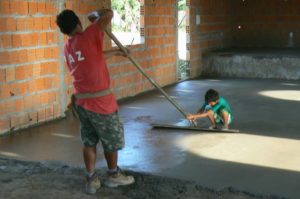 A live weight on the bull float 🙂 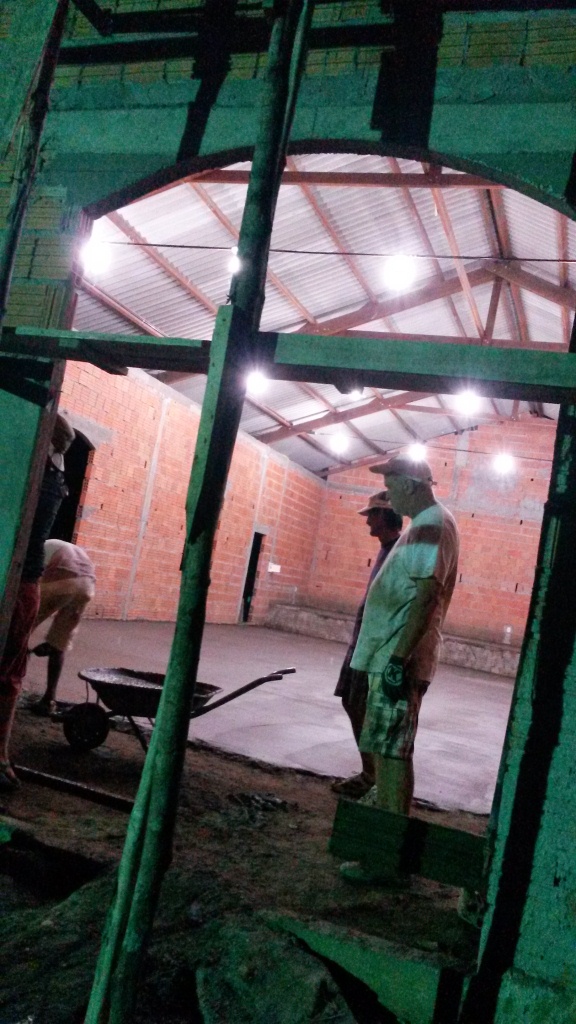 Alllmost done with the floor…and another building nearly ready to serve as a house for God’s people to meet to worship & glorify HIM.  I was so thankful to be a part of this trip, meet the incredible people on this team, and as a side benefit receive the gift of refreshment from a week outside the ”normal routine”.