Hey everyone!! Wow, it’s been a long time since my last post, but it is pretty much always a long time J I would like to start blogging about something other than boat trips, like everyday life etc. We’ll see if that will happen sometime this year J

This post is, obviously, about another boat trip. We didn’t all go on this trip, only me, Dad, & Luke. But it was our first trip (to the interior or on the river) since we’ve been back from the states. It was good, actually not a week long, only Monday morn. early to late Wednesday night. The team that came was a dental team from the States, and the guy who brought them was a missionary here in Santarem but he and his family moved back to the US soon before we moved to Santarem. There were only 5 people on the team, including him.

We left early Monday morning, as I said earlier and most of us hung up our hammocks and went back to sleep (we had to get up at 4:30AM). J It was only about a 3 hour ride, which was nicer so we didn’t have to ride all day. We stopped around 8 near the entrance (the community was off the Amazon in a smaller stream/river) and had breakfast, and then some people took off in a small aluminum boat with a motor (we usually have one or two of these kind of boats on the back of the big boat if we need it for things like this etc.) to check out the construction, talk with the pastor etc. They came back after about an hour and we headed in. We got stuck probably 2 times trying to get there, because the water was SO shallow. But, enfim, we finally made it J the church and school (where they did the children’s ministry and the nurses attended people) were at two separate locations. The church was farther down the river so every day the guys would take Lucas’s boat (one of the other pilots that flies with Dad. He was there in the community, since that is one of the communities he is working in so he and some other guys he had with him helped also) to the church site and the bigger boat would stay at the school to be able to attend people.  We went down to the church first because there was wood in the bottom of the boat that had to be unloaded. The guys unloaded all of that before we ate and got done around 2PM. This will be a wood church  ( a lot of the ones we’ve helped with before have been brick) and because of the way the river floods during the rainy season, it will be built up off the ground like 7-8 feet on wood pilings.  We ate lunch and then the work guys stayed at the church and everyone else went back to the school to start attending.

So when I go on these trips, I don’t usually have a specific job, I just kind of do whatever and help wherever I’m needed. I have worked at construction before, filled out forms and also helped the dentists some. It is fun, but sometimes difficult if I don’t know exactly what I’m going to do. This time however, I did something a little different.

My job this time was to call people when they needed someone else to be attended and to translate. The guy that brought this team (Edson {the guy’s nameJ} spoke Portuguese, but he is also a dentist so he didn’t help translate much. There are two chairs that they attend on and one of them was extraction. The guy who did extraction spoke Spanish and English, as did his wife, and there was another lady that only spoke English that helped too. So whenever they needed to explain something to the parent or anything like that I translated for them.

That first afternoon (Monday) they were able to attend about 20 or 21 people so they made good progress the first day. The last day the pastor said that they (dentists & nurses) had probably attended everyone in the community that there was to attend, and the people that didn’t come probably didn’t need it. So that’s good!!!! That night the guys got back around 6 and I had already showered and everything so I pretty much ate, watched them play dominoes for a little while and went to bed!!! I was pretty tired and I think Luke and Dad were too! (Oh, and while we were eating IT RAINED!!!!! For those of you that don’t know, it is supposed to be rainy season right now but the dry season was hot, and well, dry obviously. So there hasn’t been much rain yet so this was appreciated! Some people went alligator hunting and they got one, but it poured on them also!! Not so fun….)

Tuesday morning the alarm sounded early…..breakfast and devotional which was very good. This time in the morning before breakfast is one of my most favorite things on boat trips, to be able to worship God and talk about/read His word. Worshipping with people that are my friends and also fellow brothers and sisters in Christ is the perfect way to start the day to me!!! J Aldine and a friend of hers from the south, Selma, went at 7:30 to do the kids ministry at the school. After breakfast was over, when I was free I went up there to check it out and they did such a good job with the kids! (They did something in the afternoon too with the older kids…more about that later) I helped with translating again etc. and then for lunch we went to the church so the guys wouldn’t have to come back. They probably attended around 20 people in the morning and afternoon Tuesday and Wednesday.

That afternoon I helped with translating again and calling people, but I also sat in a little with Aldine & Selma and the teenagers. Selma talked on Tuesday and Wednesday Aldine talked. It was good! I sat in only a little on Tuesday cause I was helping and didn’t feel I could just go and sit and then they not know where I was. Wednesday however I sat in for the whole thing because what I heard on Tuesday I liked so much J ha-ha it was good I’m telling you!! Haha okay I will stop saying it was so good….. J

Tuesday night the guys got back even later than Monday….around 7. Aldine learned that every night from 6:30 to 9:15 (around there) they have class for the adults and there was going to be an English class on Tuesday so she volunteered to teach it J I went up for a while b/c I wanted to see what it would be like and what she was going to do and b/c the guys weren’t back yet either. After probably 15 min. I went down to the boat again so I could be sure to eat and shower before the guys got back. (It was kind of funny, we always tried to get showered before the guys got back, ‘’cause there were a lot of them and they might need the women’s shower’’). Obviously, they didn’t ever use it…haha so much for that…but I thought it was good because then I could eat and shower or then shower and eat and then it was much easier for me to be ready for bed sooner. I think I got in bed by 9 Mon.  & Tues. so that was good b/c usually its 10 or 10:30!! (On boat trips)

Wednesday the alarm sounded bright and early again…J Wasn’t as ready for it that morning however… J Still a litttttlle tired lol Breakfast and devotions preceded yet another and the last morning of translating and helping the dentists. Following that was lunch (this time the guys came to us J) which was then followed by helping out for the last time……After we had attended everyone we headed down to the church (we were going to pick up our guys because Lucas and some of the guys with him were going to stay a day or two longer. And to see the ‘’church’’ {still in progress. They started at the very beginning while we were there} for the last time. There is a guy and his family (wife and three kids) that lives right beside the church that isn’t necessarily a believer (hasn’t said ‘the prayer’ yet) but helped out and is involved with the church etc. One of his sons, João, (John) who is 5 hung out with me at the end a little. He was so cute and let me hug him and stuff but his words were off a little and he was kind of cocky you could say J anyway he let me take a picture with him (wanted to take one of me tooJ) and it was just cute and fun.

I was sad to leave, as every community is hard to leave. I feel like it never gets easier to leave. Even though this one was only 3 days, I still left feeling sad we had to leave. Obviously, when we stay a week we have +some days but I still feel the same. So sad to leave those people who have made a mark on your heart and impact on your life J and that pretty much sums it up..;)

See all the pictures below!! J P.S. the name of the community was Tapara Marim 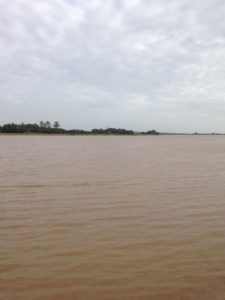 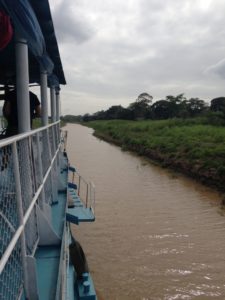 Heading up to the village 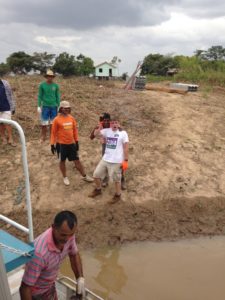 Dad and Edson goofing off on the job 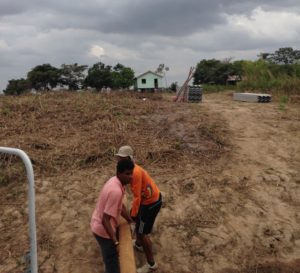 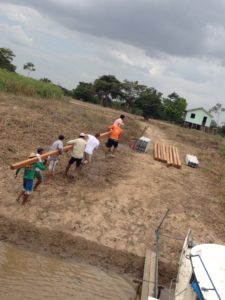 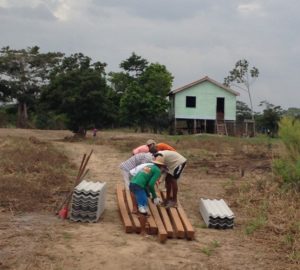 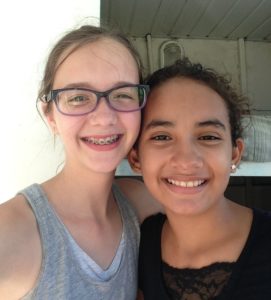 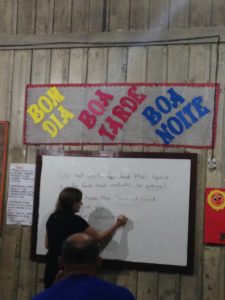 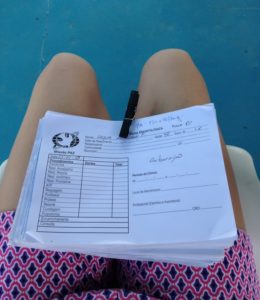 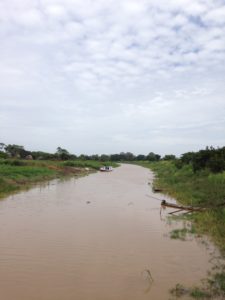 The school is to the right and ahead is the church

Putting in the posts 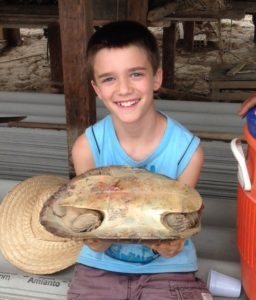 Is that a snapping turtle? 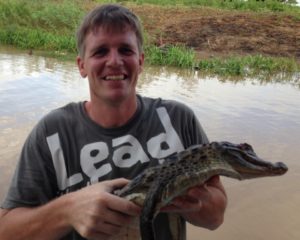 Supper! The smaller, the more tender the meat. It was delicious! 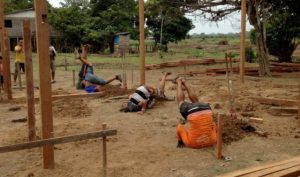 Too much sun can make you do crazy things. 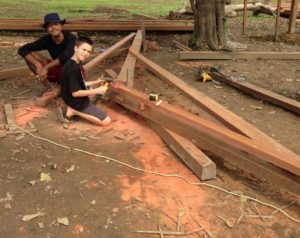 Luke working on the trusses. 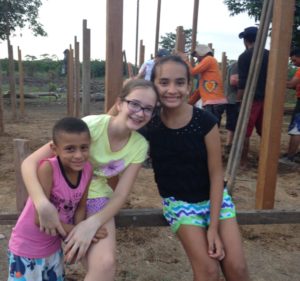 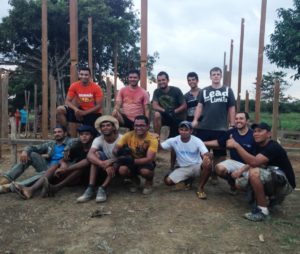 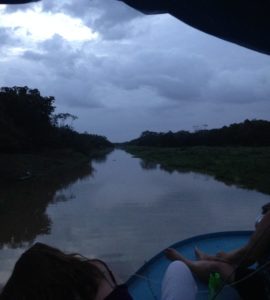