So one thing we’ve become fairly well acquainted with over the past month is pulga-de-pé, or bicho-de-pé (one translation I saw said these were jiggers, but I’m not sure).  It is a small black worm that burrows into the skin and lays eggs.  Not painful at first, but as it grows it can become quite painful.  Jaelah came to me on a Friday and said her little toe had hurt for a couple days–was actually a little swollen by that point–and I checked and found one right alongside her toenail–hard to see and not real fun to dig out either because that’s a tender spot, and you need to be sure to remove not just the worm, but all the eggs as well.  I will spare you the pictures of that.  Jaelah has been calm enough to extract her own, while others in the family squeal like a stuck pig.  Each person in our family has had the joy ( or not) of extracting at least a few of these things from their feet, although I think Mariah has only had two, and we’ve lost count of how many Luke has had.  The first time he got one was right before leaving on a river trip.  While they were out on the river, one of the men from the community took it out for him–and announced that it had a whole family in there with it!  Mom, Dad, aunt, uncle, grandma, grandpa, cousins…lol

These first two pictures are just for comparison.  Both were taken standing just outside the door of the floatplane hangar, at the top of the ramp.  The first was taken in early January, shortly after we returned to Santarém from the states.  It was DRY!  No floatplanes going anywhere, because it was a LONG ways from the end of the ramp to the water (that little puddle by the boat to the left was just that, a big puddle, and didn’t come close to reaching the canal out to the river seen in the background.

The picture below was taken the second week in March, same location.  The water level is up to the end of the concrete ramp, and has allowed some of those beached boats in the first picture to float again–and the planes to leave the hangar!

During a family day we headed to the airport with Matt as he needed to work on the tachometer on the RV, and the kids were able to take a quick test flight with Dad afterwards.  Luke & Jaelah were actually just in the plane together for the picture, Matt decided if Jaelah was complaining about being uncomfortable with Luke’s bony rear end on her lap before they ever got off the ground, one of them had to go 🙂

Mariah & Sierra went together with Matt. I asked if Sierra liked it, because she has some fear issues–his reply was that she stopped screaming once he stopped ascending so fast and leveled off a little.

International Women’s Day is celebrated March 8, and it has been so interesting to me that it is such a big deal here (and in some other parts of the world) too….because I had never heard of it before moving to Brazil, considering the origins of the holiday are actually tied to an event that happened in the United States.  My hubby surprised me with chocolate, and Sierra made me a card! 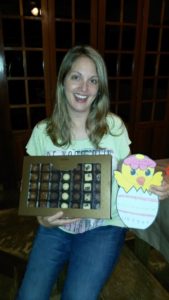 Before we moved to Brazil, I knew we would say a lot of goodbyes–to family, friends, people we loved in the United States.  But it didn’t click that this would be our ”new normal”, and that the goodbyes had only just begun.  Even once we finally landed in Santarém, it has been a continual stream of hellos and goodbyes.  Mission teams, and the people of the communities that we visit with them, become fast friends, whom we must then say goodbye to at the end of their trip.  I remember early on, maybe the 3rd or 4th team that came after we moved to Santarém, had come to spend an afternoon at our house, and as we all headed out to say hi to them, Sierra refused, and announced she was NOT going outside.  I thought she was just being stubborn, or rude, and asked why not….and she said, “Because if I make new friends, they’re just going to leave”….and I thought my heart would break for my poor sweet 5 year old.  We’ve said hello and goodbye to family visiting us here (an amazing blessing, but still not an easy thing).  Multiple hellos and goodbyes to the daughters of another missionary family who are studying outside of Brazil.  Goodbye to a family that volunteered with PAZ for a couple years and moved back to the U.S., who had a daughter close to Sierra’s age.  This month, (pic below) Jaelah was saying goodbye to a sweet girl she’d participated in dance ministry with.  She and her sister had been part of our kids’ cell group for the past two years and the girls in that group had had more than one sleepover at our house.  It was expected, as we knew from the beginning that this family was preparing to head back to Portugal to plant churches. It was exciting, because hey, they were going to Portugal to plant churches!!  It was hard, because hey, Portugal is far away.

Before we moved to Brazil, I read somewhere that goodbyes for missionaries can actually be harder the second time around–like after being back in their home country for furlough and returning to the country of service.  The initial goodbye is hard, going SO far away, the “unknowns”….but the second time (or third, or fourth) it can be hard because of the ”knowns”…I know how a year without seeing my parents feels.  I know how nearly three years without seeing other family and people I love feels.  The frustration of garbled skype calls, 3 hour time differences, and how it feels when a picture of the trees in my sister’s yard makes me cry–because they have grown and changed so much over those years (don’t even get me started on my nieces and nephews).  Technology is amazing and wonderful–and sometimes it just reminds me of what I’m missing.  And then sometimes to add to that sadness, there is guilt, because, what am I whining about, I signed up for this–right? No one forced me to come here.  And there are people that have a lot bigger problems (actually I could write a whole blog post on that, 3 or 4 families come to mind immediately)  And it is worth it isn’t it?  Absolutely.  Some days I love the excitement and adventure of living in a country other than where I was born.  I love that our kids have a much different global perspective than I did growing up.  They are bilingual!  I love that they know kids whose families are spreading the gospel in other countries–such fun connections!  And most importantly, I believe this is where God called us.  But still. Some days……I get so, so tired of the goodbyes, of the continual change–and long even more for a Heavenly home.  No more goodbyes.

One morning as Sierra and I were working on school, we looked up to see that we had a visitor–maybe another student wanting to learn?  🙂  Fortunately he crawled back up through the roof.  When he came back a few days later, Sierra decided it was time to get the broom out.