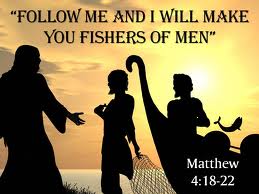 “Our hearts yearn to see a great moving of the Holy Ghost here in which hundreds and thousands are moved to repentance and saving faith in the Lord Jesus Christ [but if this doesn’t happen], It’s not God’s fault, but a shame for those of us who name the Name of Christ and are busy twiddling with the toys of this world instead of being engaged in the hot battle for the souls of men” ~Melvin Huber, missionary to Brazil (app. 1965)

Jesus has called us to be “Fishers of Men”. I have to admit, in the last few months here, I had slipped into the drudgery of life. Trying to conjugate verbs, having fun with the family, enjoying getting to know our church family better (we’ve been invite to numerous homes over the last month and as we learn more and more portuguese we are able to interact on a deeper level each time), and many of the other things that are good…..but are they the best? I read once that if satan can’t get us with outright sin, he tempts us to settle for what is good rather than doing what is best. Right now we are here to learn the language so that at some point we can move up to the Amazon and use aviation and technology to take the gospel to people that have never heard. But what about the people here who might have heard but still need discipleship or encouragement?

That is what I had forgotten over the last few months. I am reading a book called “T4T: A Discipleship Re-Revolution: The story behind the world’s fastest growing church planting movement and how it can happen in your community”**.  OK, I’ll just warn you, unless you are serious about sharing the gospel right where you are, I wouldn’t recommend picking up this book.  Any3 is a course you can take to help you learn how to share the gospel if you feel inadequate. But again, a warning: Any3 focuses on you sharing with:                ANYONE, ANYTIME, ANYWHERE

I have definitely not been doing this the last few months. If we are honest with ourselves, we would admit that we have many excuses for not spreading Jesus. Let me share a few of mine and see if they ring any bells:

1) I can’t share with family. It might cause hard feelings and we are getting along so good right now.

3) People I work with?? Are you kidding? Isn’t that illegal? Plus, right now they think I am halfway normal and I don’t want to rock the boat. Aren’t you supposed to build a relationship first (yea, usually, but you’ve been working there for 10 years……what are you working on? the Titanic?)

4) Strangers….uh, no. I don’t know how to start a conversation with a stranger.

Well, that last one hits home for us because we do have a great way to start a conversation. Many people here love to practice English and are very excited to meet someone from the United States. Especially someone who is interested in learning their language. So over the last few weeks I have been practicing my testimony in Portuguese. Granted, it is very rough and I have to read some of it, but you gotta start somewhere right?

I’ve met an amazing young guy at church who is “on fire” for the Lord. Heitor is a unique individual. Heitor will often preach while he’s riding the bus. Talk about a captive audience. He said he’ll just stand up and start talking about God’s love, our sin, and how He offers forgiveness through His Son. He said the last time he did this, he was able to lead four people to the Lord.** 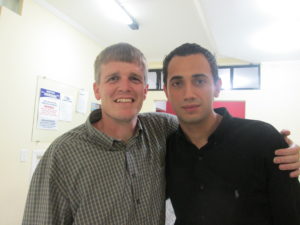 So I asked Heitor to go with me and help share the gospel afterwords.  To say he was excited about going is an understatement. Today we “hit the streets”.  We were able to visit with half a dozen people. I shared my testimony, Heitor followed up with a clear presentation of the gospel and we also had Portuguese Bible stories to hand out.

We shared with one young girl who believed she was a good person (most of us do). I asked her if she had ever told even a little lie and she admitted, yes. Heitor shared that if he had a glass of water and put just a tiny piece of manure in it, would she drink it? No way. That is what our lives are like. Just the smallest sin and, according to the Bible, we are unworthy to enter heaven. After that she was very interested to know how she could have her sin forgiven.

We talked with another young man for over 45 minutes. I ask you to pray especially for him. He told us that God brought us specifically there to talk to him today. He gave Heitor his phone number and said he would like to come to church this Sunday. He owns a small cafe where we’ve taken the kids on “dates” numerous times so I will be seeing him again.

I was also able to share my testimony with two teenage boys and we gave them Bible stories.

Praise the Lord His Word will not return empty but will accomplish what HE desires and achieve the purpose for which HE has sent it!

***The T4T method is not without criticisms. However, only Jesus did it best:      One day a lady criticized D. L. Moody for his methods of evangelism in attempting to win people to the Lord. Moody’s reply was “I agree with you. I don’t like the way I do it either. Tell me, how do you do it?” The lady replied, “I don’t do it.” Moody responded “I like my way of doing it better than your way of not doing it.”