“Family”- written by our niece

Hammocks, mangoes, skits, stingrays, laughter, handwork and card games. Those are a few key words that made up an amazing week spent with family, making lasting memories. My grandpa had desire to build a church along the river in memory of our grandma so 11 of us went down and helped with the process. Not only would we be able to offer a place of worship to the people living in that village,, but we’d be able to visit an awesome family living down there! It was like a big week-long family reunion minus half.

Being able to finally see where Matt & Janelle live was a lot of fun! I decided there are a lot of things I take for granted. A hot shower and paved roads to name a few. Although most of the time we were driving, I thought I was on a ride at Kings Island, which was quite exhilarating!! So kinda to walk you through our trip:
After crashing at Matt’s house and getting sleep for our deprived bodies, we did some touring and catching up. (the cousins were thrilled to see each other!!) We were able to attend the PAZ church on Sunday before we headed out for the boat trip. The worship was beautiful and observing such enthusiasm toward the Word being taught was incredible and convicting. 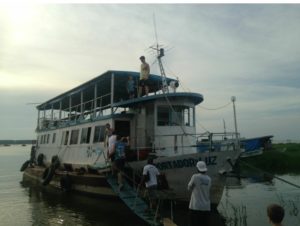 We met the team cooks, bricklayers, the captain, and a few other eager workers and loaded up to head out! We left during the night so everyone could sleep. The plan was to get to the village in the wee hours of the morning, but we ran into a storm on the way and had to wait it out. Rain was pelting the tarps and lightening was flashing all around us. ( I woke up and thought I was on the Sea of Galilee with the disciples)

Every morning the faithful cooks had a delicious and nutritious breakfast with fresh mangoes, hot oatmeal and coffee to get us energized and ready for work! After devotions and dishes, the team went to a different village that needed some work done. Basically there were thousands of bricks for the church stacked in the bottom of our boat and we needed to unload and help get them ready to use. 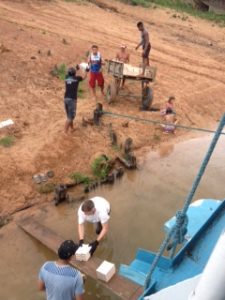 It’s amazing how fun you can make loading bricks! The cement also had to be unloaded and go up to the church. The cow was tired so we made other arrangements (click here)
So our first day was mainly spent at that one village, but we headed back (it was about an hour ride) and took dock at our village. Any down time was spent playing cards! Let’s just say that euchre, Speed, Dominoes and Uno was constantly being played whenever work or eating wasn’t happening. But it was so neat because there were a few Brazilian teenagers that went along and despite the language barrier, we all could play the games together. (With the help of either Jaelah or Luke to translate once and a while!) 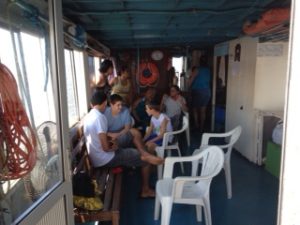 Day 2: Work on the church begins! Shovels and wheelbarrows ready, we started in after breakfast and began leveling the church floor, and boy was it uneven. An hour into it, the rain clouds came in and our showers happened early! Working in the pouring rain was actually quite fun. You had to forget about staying mud free. That was impossible. 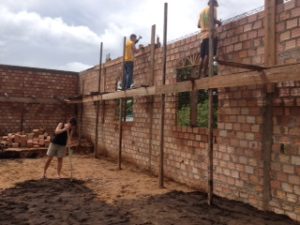 Along with working on the church, we wanted to make time to spend time with the children living in the village. Faith did an amazing job organizing all the activities. Face painting, duck duck goose, soccer, etc. We also had short 5 minute skits on the Fruits of the Spirit, which resulted in lots of smiles and laughter. 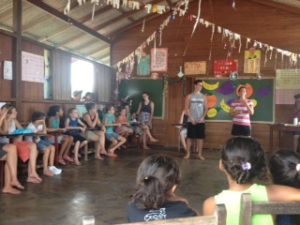 That evening (Tuesday night) once it got dark and we could no longer work, we had our dinner which once again was delicious. A guitar was usually brought out and we would gather around and do some singing. This was one of my favorite parts. Sitting around in close quarters next to people you couldn’t communicate with, and all singing to one God, in the middle of no where, with the starts all around.  Portuguese, English, on tune, and off key… every person was praising Jesus in their own way and together it sounded beautiful, because the love and the Spirit in everyone’s hearts was written all over their faces and heard in their voices. 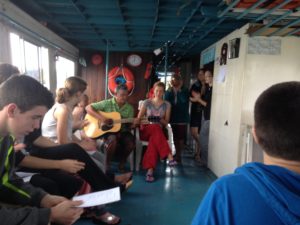 The man with the guitar was the captain of our boat and saying he could play the guitar would be an understatement! He had quite the talent and was often playing encores. 🙂

The ground was level for the church and cement needed to be made for the walls of the church.  Everyone had a role in the cement making! We had gravel to be shoveled, sand to be hauled, and water pails to be filled. Plus several people constantly stirring the mixture. I think most of us, at least me anyways, quickly learned that stirring concrete is a lot more difficult and exhausting than it looks! A plus for the day was that the sun was out and hot! We got what we needed done before the sun went down so that’s always a good thing! 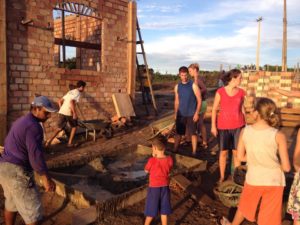 We spent more time with the kids when the guys didn’t need any more help. The joy on the kids’ faces left a lasting impact on most of us.  Being able to hold the little kids, paint little rainbows on their faces, and make paper puppets together was one of the sweetest and most precious moments. 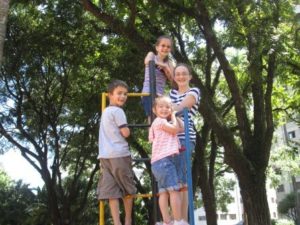 That evening we had a church service at one of the open pavilion-like buildings there in the village. The homes and buildings were all about a mile’s walk from our boat.  All of us acted out a skit for the people at the beginning of the service and then Matt finished up with a message.  Our skit took place in an underground church where we tried to convey the message that persecution is occurring today and how we can pray for them as well as be made aware.

Another special moment was being able to sing Light the Fire with our family for the people. Even though they probably couldn’t understand what we were singing, all of us knew how special the song was to us. Singing a beautiful song and looking around at all the people we got to know, and looking over to the church that was being built in memory of the special person in our lives, I can’t really explain the emotions.  But it was beautiful.

We spent another night making memories with everyone on the boat and headed out in the early morning for Santeram.

One last stop was at a little secluded island where we were able to relax for a day with the crew on the boat and the few workers that came along.  This was a really neat time because it was an opportunity to spend more time with one another and do a few things that they don’t normally have opportunities to do. For example, a group of us hiked a cliff/hill and were able to see the Amazon from a breath taking view.  I went along thinking it was a leisure jaunt up a hill.  I didn’t know I would be climbing straight up a cliff of pure sand, and being pulled by a rope). But despite some scary moments, and a possible tiger paw print discovery, we had a blast.  Until the man leading the hike got stung by a stingray. 🙁 But God was merciful and prevented any of the kids from getting stung! 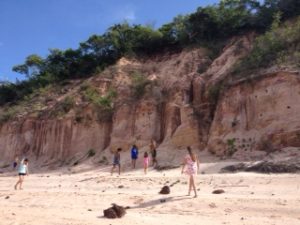 Joakim, one of the workers who plays a great role at PAZ  found some skies and we were able to pull a few people behind one of the motor boats!! It was so fun to be able to watch the Brazilians try getting up for the first time. They had never ever done anything close to this and so it was very neat to see their excitement! I think someone’s going to send a wake board down with the next group. 🙂 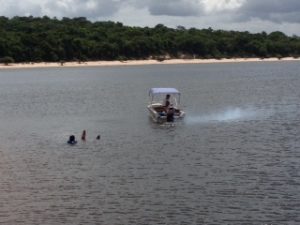 Yeah, that’s smoke barreling out the engine. A little sketchy but it worked!

We got back to Matt & Janelle’s, where we spent another couple days exploring the city.  Since sleeping in hammocks was such fun, some of us had to go buy some, along with some Brazilian food that we grew accustomed to. 🙂 We also were able to tour the Mission where we saw the main building where business for PAZ gets done at.

On Saturday night at 7:30 we loaded up our luggage and tearfully headed for the airport.  Goodbyes were hard but saying goodbye was so worth it, when we think of the week God blessed us with!! 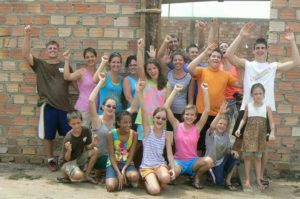