Jameson: About 3 months ago, I was at cell group when a young man entered. I didn’t get a chance to talk to him that night because he left early. The next week he wasn’t there so I asked about him. “oh, he is backslidden and has some problems”, they said. I said, “well, I’d really like to talk to him”. I felt God tug at my heart to meet this man. I went to where he lived, but his roomate said he wasn’t home. I asked what his name was and then told them to let him know I would be back the next night.

The next evening, I grabbed my friend Carlos and we went there. We talked for a bit, and he admitted that he was not doing well with the Lord. We explained our strategy (what Jesus did and taught), to not only bring people to the Lord, but then to disciple them. He was touched at and one point looked at me and said, “I can’t believe you came here to specifically talk to me”. That night he prayed to re-dedicate his life to Christ. The next week Carlos went back to do a follow-up visit. His roommates said he was out drinking. While Carlos was there, Jameson arrived, yes, drunk. He apologized and said he was walking down the street and his “friend” insisted he come have one drink. Logo, logo (soon, soon) as they say here, he had too many. He cried that night and said no more. The next time we went back, he was not there. Had moved out and his roommates didn’t know where. I kind of forgot about him, but a few weeks later Carlos said, “guess who I saw up town?” Jameson! He didn’t get his address and didn’t have a phone, but was able to encourage him. A few days later Carlos and I were working on our church when someone went flying by on a motorcyle. Carlos glanced and said, “That’s him!” And started running. I said, “Who, and you aren’t going to be able to catch him running, Get in my car!” We “chased” him down and was he surprised to see us. But excited and grateful that we were still “for” him. Praying and concerned. We got his address and have since visited him. In December, I got back from a trip and hooked up with Carlos, “hey, guess who gave their testimony in front of church yesterday?” we’ve worked with a few people so I couldn’t guess but with tears in his eyes, he said, “Jameson”. Thankful that HE is still working miracles in people’s lives as they allow Him. 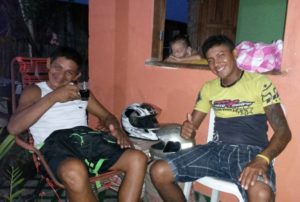 Tubarão: Two weeks ago Joaquim and I took the truck and a bunch of scaffolding 12 hours to another city where we are building a church. We were also taking two professional welders to work on the metal trusses of the church. These guys weren’t Believers but Joaqium had used them in the past so he asked them to help. During the long trip we began talking about our “work” in the Church. Joaquim explained it them as if we are working for the greatest company in the world–and have the best boss ever! Logo, logo, we arrived to the Gospel. He explained how Jesus was willing to die for us, while we were yet sinners, and that the invitation is still open. They discussed their lives and how they used drugs, women, etc, but we explained that even the hardest chains can be broken and that with Christ, they could be free. After an hour or so we prayed with them, and then Joaqium explained what would happen next. “I am going to be like your spiritual father”, he said. “As I follow Christ, you are going to follow me. I’ll help you. Starting with this, when we get to this city, you will not go out at night without first asking me or one of the other brothers from the church”.

We arrived and went to work. The next day I suggested