Hello all! This is Jaelah here, as it says above. In this post I am going to tell you about a birthday party that we went to, (it was a friend of mine from school) and we also went to a Parque (park) here one day with one of Mom and Dad’s teachers, and Mariah’s teacher too. I am going to start with the birthday party. There is no pictures at the place because we forgot the camera but we have a two that showed what we got to do. It was at a place called Hullaballo. I guess you can get it on a night and have your birthday party there. It was sooooo much fun!!!! They had a climbing place, a  little room to get your hair spray painted, (as shown in the pictures below). Also there was a place where you sat on a bench, (below was tons of balls) and there was a button that you threw the balls at to try and knock the person off the bench and into the balls!! I was pretty good at hitting the button on my first or second try by o fim de a noite. (the end of the night!)  They had soo many things that if I went back and took pictures and blogged about them, it would take a long time!! Well I guess I should move down to the bottom and write about Parque Ecologico. 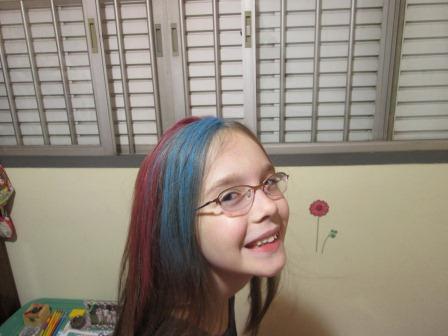 This is my hair! They had a place there where you could get your hair painted, so we all (us kids!) did except for Mariah because she didn’t want to. I got blue, pink, and orange, which you can’t see. 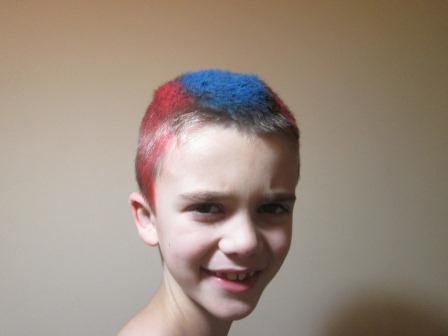 And Luke’s hair! He got blue on top and red on both sides!  Parque Ecologico:  (pictures and some stuff about what we did.) 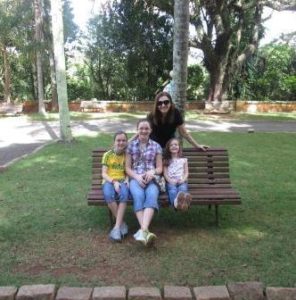 Us girls and Maria, Mom and Dad’s, (and Mariah’s) teacher, that I talked about earlier. 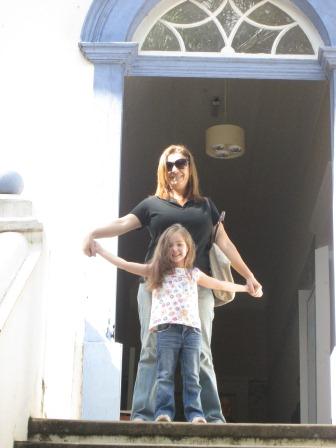 Sierra and Maria standing in front of the doors of the house. (you can only kinda see them!)

Our family, as you can see, Sierra was in her not picture mood here! 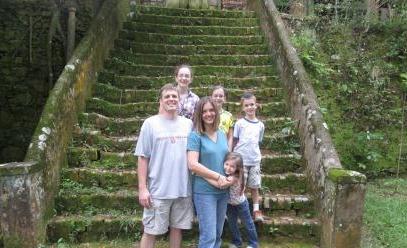 It used to be a coffee plantation before, so we got to see the house, basement, (where the slaves slept) and many other things. We did not see any bedrooms with beds in them, but I think there used to be beds in there but maybe they took them out because they were to old. I would have liked to see one though! I don’t think any of us kids saw a bat, but Maria said she saw one and I think Mom might have too. Just in case you were wondering, the bats were down in the basement where the slaves slept. The house was EXTREMELY clean too, though I don’t know how many years it’s been standing! 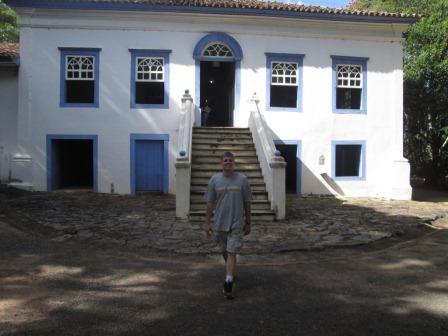 This is there house!!! It is sooooooo long if you walk along side of it! The two doors on the bottom, Maria said were for when they hitched up their horses. 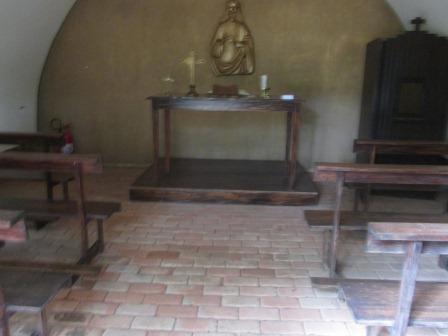 This is the family’s church. As you can see it is very small, but Maria said that is because only the family worshiped there.

That’s all I have and hopefully it gave you a good glance of some of the things we do here in Brazil!