Well it has been a long time in coming, but here is another class update. I have definitely learned another reason why God has brought us here to Michigan before making the jump to foreign missions– I need to learn how to interact with other people on a daily basis.  For those of you that don’t know, I was an independent consultant for the last 10 years. I basically set my own schedule and traveled around the country visiting farms and helping them with their nutrition. I was rarely in the same place for more than 2 days and therefore about the time we started getting “sick” of each other, I was off again.  I had forgotten what it was like to see the same people every morning at 7am and to be in the same room with them for 8 hrs a day, 5 days a week! Things have been going well school-wise, but I am sure the other students are getting tired of hearing my (what I think are funny) comments at 7am.

I thought I would give a brief description of the school agenda and then what we’ve done so far.  SMAT is one of the few programs in the country which allow you to receive the training you need to obtain your Airframe and Powerplant Mechanic Rating in just one year– most are 2 or 3 yr programs. Basically there are 2 parts to the course. One is the curriculum (labs, quizzes, attendance and tests).  These are required prerequisites for taking the government Practical tests (FAA written) and after passing those, we have the opportunity to take our O’s and P’s (FAA oral and practical tests). The O’s and P’s are where the instructor asks you verbal questions and then you have to go out in the shop and do the tasks you have been learning about.  An O and P exam takes 4 to 6 hrs.

The class is broken up into 3 phases: General (August – November), Airframe (November – April) and then Powerplant (May-August). And you guessed it! for each of these 3 phases, there is an FAA written test and O’s and P’s (6 total major tests).  There are 47 total different subjects.

The General section is divided into multiple subjects (Aircraft drawings and diagrams, aircraft handling and Safety (try not to run into anything when pulling the airplane into the shop), electrical, corrosion control (washing airplanes once a year helps keep them from rusting out– you don’t like when your car rusts, right?  a rusty airplane is even worse cuz then the wings fall off and stuff.  Now my wife will wash our airplane every week when we are in Brazil :), Aircraft hardware and tools (this is a hammer and this is a wrench– unlike what I learned on the farm, a 1″ Craftsman wrench is NOT a hammer), Weight and Balance (you want the airplane to be halfway balanced when you takeoff, otherwise if the nose is too heavy, you takeoff, but then you come right back down and all the passengers come up front with you really fast and you have to get a new front wheel).  Here are some pictures of the General classes: 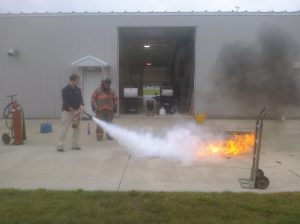 Fire control (Above) and Cleaning an engine or Powerplant (Below): 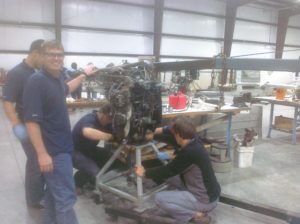 Weighing an airplane (below)– yes, I still do alot of standing around while watching others work. It’s a good thing my Grandma is not at school with me 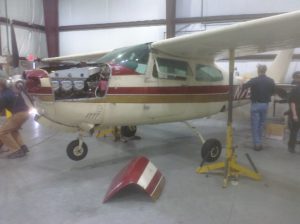 Around thanksgiving, we will start the Airframe Section. This involves studying the parts of an airplane and learning how to repair airframes.  We will go into greater detail about electricity (troubleshooting issues), learning about hydraulics and how to fix hoses (yes, I know my brothers will think its crazy to do all this stuff when we did it all on the farm– but this place is alot cleaner and has cooler tools). In the repair section, we will be replacing skins of airplanes.  Airplanes are kind of like animals– they can have a variety of skins.  Aluminum is the most common for smaller airplanes, but the airplane I have been flying lately is called a “tube and fabric”.  Yes, this means that they take metal tubes, weld them together in a frame, and then wrap fabric around them for the structure. If I would have known this stuff growing up, our 3-wheeler / snowmobile / go-cart would have also been an airplane.  Some smaller jets and expensive, fast airplanes are made of composite–  an off-shoot of what fiberglass boats are made of. We will learn how to repair all these types of coverings as well as doing some welding on the frames of the aircraft.

Next spring, we will start the Powerplant section. They call it powerplant instead of engines because there are couple types of power devices that can be attached on the front of airplanes to make them go.  For example, an airplane may have an IO360 engine. This means Fuel injected, Horizontally opposed, 360 cu inch engine. We will be learning about reciprocating gas engines as well as Radial gas engines.  Radial engines are typically found on larger aircraft like crop dusters.  They will have alot more horsepower compared to their weight than a regular engine like in your car because the pistons go around in a circle and therefore don’t have to have a long crankshaft. The other powerplant is a turbine or jet engine.  Turbine engines can be found on TurboProp airplanes or Jets.  If you’ve ever ridden in a “puddle jumper” you’ve probably been on a Turboprop.  A TurboProp uses a Turbine or Jet engine to turn the propeller.  Then you have jet airplanes which don’t have propellers, the force of the exhaust propells the airplane forward. The advantage of a turbine engine is that it can go really high.  A regular gas engine can only go so high (14,000 feet or so) before the air gets so thin that it can’t get the correct fuel to air mixture and the engine can’t produce anymore power.

Most likely I will be taking my first FAA test (General section)  in late December.  Then I will take the Airframe FAA test in April and my Orals and Practicals for the General and Airframe in May with the Powerplant FAA test and O’s and P’s being done at the end of next summer.

Wow, that is probably way more than you ever wanted to know about airplanes but now you have a glimpse of my life for the next 9 months.